As a member temple of the White Plum Asanga, Great Wave is part of a distinguished, worldwide lineage of teachers descending from Hakuun Taizan Maezumi, Daiosho. 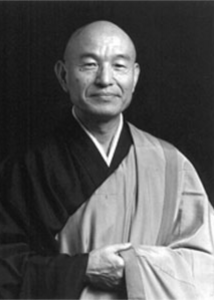 Maezumi Roshi trained under a number of eminent masters in both the Soto and Rinzai sects, the two major schools of Zen Buddhism in Japan.  He established temples in the United States and Europe and is the founder of the Zen Center of Los Angeles.  Maezumi Roshi completed his Soto monk’s training at Sojiji monastery, one of the two main Soto monasteries in Japan.  In 1955, he received Dharma Transmission (Shiho) from his father.  He later received approval (Inka) from both Hakuun Yasutani Roshi and Koryu Osaka Roshi (a lay Rinzai teacher), thus becoming a Master in three Zen lineages, a rare and extraordinary achievement.  Below, you will find some details about his teachers. Maezumi Roshi’s father, Baian Hakujun Kuroda Roshi, was head of the Soto Sect Supreme Court and one of the leading figures of Japanese Soto Zen.

As a student of Harada Daiun Sogaku, Roshi, Yasutani Roshi took what he considered the strengths of the Soto and Rinzai sects and created a new lineage of Zen, known as the Fellowship of the Three Treasures. 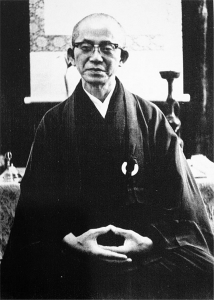 Koryu Roshi was a Rinzai teacher who emphasized lay practice.  Koryu Roshi’s teacher, Joko Roshi, empowered him to remain a lay teacher, and this emphasis on the validity and importance of lay practice continues at Great Wave today.

Myoyu Roshi is the abbot of Great Plains Zen Center.  She studied for over twenty years with Taizan Maezumi Roshi at the Zen Center of Los Angeles.  In 1978, she was ordained as a Buddhist monk and in 1995 received shiho (Dharma transmission), authorizing her to become a Zen teacher.  Myoyu Andersen received the title of Roshi from the White Plum Asanga.  Myoyu Roshi is also the mother of two children.  In addition to her responsibilities as a mother and as the spiritual director of GWZS, she worked for many years as an occupational therapist for children with severe developmental disabilities. Gendo Roshi is the Spiritual Director of Great Wave Zen Sangha and abbott of Myogenji (Subtle Source) Temple in Ludington, Michigan.  He has been a Zen practitioner for over 30 years, receiving jukai from Dennis Genpo Merzel, Roshi, on August 1, 1992.  On July 15, 2006, he was ordained as a priest in the White Plum lineage by his teacher Susan Myoyu Andersen, Roshi, and in the summer of 2008 served as Shusso (head priest) of the Great Plains Zen Center at Myoshinji–Subtle Mind Temple.  In June 2012, he received Dharma Transmission (Shiho) from Myoyu Roshi, and on April 21, 2018, she conferred inka upon him.

Gendo Roshi is also a writer with numerous publications of poetry in a variety of magazines and in the anthology Beneath a Single Moon: The Legacy of Buddhism in American Poetry.  He is also the author of The Driftwood Shrine: Discovering Zen in American Poetry.  He currently works as a college professor, is married, and has two children. 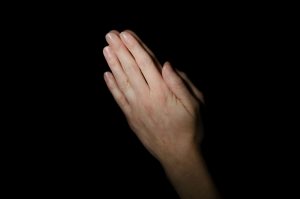